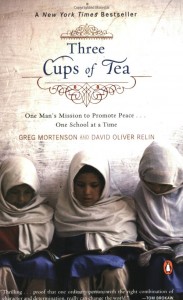 I have recently read three books set in the turbulent world of Afghanistan. Two were moving fictional stories – Khaled Hosseini’s The Kite Runner and A Thousand Splendid Suns and the third an awe-inspiring true account of one man’s humanitarian work in Pakistan and Afghanistan.

I read A Thousand Splendid Suns first and it had a profound effect on me. Not only did the novel educate me on Afghanistan’s recent history, it plunged me into the daily reality of war and oppression. It left me feeling incredulous, humbled and deeply saddened as I began to fully comprehend what the Afghani people have experienced over the last few decades.

Three Cups of Tea, the story of Greg Mortenson’s adventures in establishing over fifty schools in rural Pakistan and Afghanistan, therefore came as a relieving reminder that, despite the stranglehold that hypocrisy and exploitation has on many parts of the world, it is still possible to breathe in lungfuls of fresh air.

Mortenson’s tale begins with a failed attempt to reach the summit of Himalayan legend K2. From there he goes on to make connections with the simple people of the remote mountain villages of Pakistan and takes a vow to improve the new generations’ opportunities by helping to build schools for those children left uneducated by the inefficiencies of local government. He particularly focusses on educating girls – a controversial matter in Islamic countries.

The book, written by Mortenson and journalist David Oliver Relin, weaves the story in threads of rich prose but keeps its feet firmly planted in the reality that created it. It follows his numerous journeys to and from Pakistan and Afghanistan where he inspires both deep respect and some fearful opposition from the local people.

Having been shocked by the injustices of the Taliban regime that I witnessed through the eyes of Hosseini’s characters, I was now left in awe at the sacrifice, determination and bravery that was demonstrated by Greg Mortenson’s story.

I thoroughly recommend all three books. They are all eye-openers. I thank Khaled Hosseini for helping me to understand something of what people of Afghanistan have experienced and I thank Greg Mortenson for reminding me of the power of human compassion and determination.

This entry was posted in Books. Bookmark the permalink.

5 Responses to Three Cups of Tea